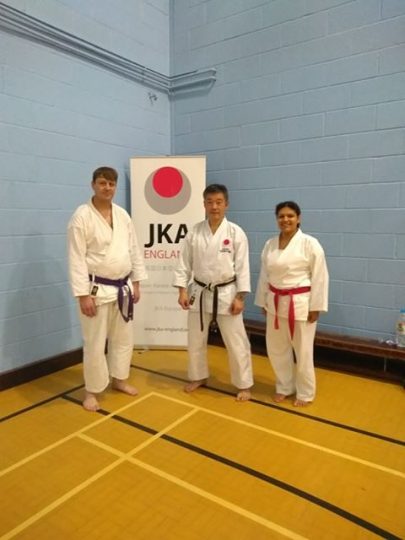 After a warm up, Sensei Ohta led the whole class practicing Kihon basics. Starting off slowly with basic moves, blocks and punches then gradually increasing the speed and power of the moves. Then came more complicated moves and changing stances from front stance to back stance and into horse riding stance and applying a technique such as elbow strike, straight punch or knife hand block with each change of stance.

After a break, the class was split into two with Sensei Ohta leading the black belts and two JKA England instructors leading the coloured belts for some in-depth kata practice. Each student had ample practice of all the kata from kihon up to tekki shodan. The instructors were on hand to correct any mistakes and to help the students perfect the movements of each kata.

Finally, the course concluded with seated meditation or moksu and after that there was an opportunity to have your photo taken with Sensei Ohta. It was an enjoyable course and a good workout and there was lots of knowledge taken home.

(Report handed in by A Dalton)

East London JKA Karate Club present at the Regional course held at Basildon over the weekend.

Another great course with Ohta sensei

Started off with simple punching and blocking techiques gradually becoming more advanced and complex, we were made to work with partners pushing each other with speed, target and footwork (shifting and positioning).

Drills developed onto KUMITE drills (very hard work both physically and mentally, however sensi Ohta was very patient with everyone and eased us all into the drills.

Course was finished with KATA for all grades with tips and points to take home and improve on.

Great course, if you missed it make sure you attend the next one.

we cannot emphasise enough the importance of these courses as they are a great source of knowledge for future gradings and development of your karate studies.

Only one observation form our point of view, regarding disappointing participation from our Club, 3 instructors and only 5 students we need to improve our attendance to the courses.